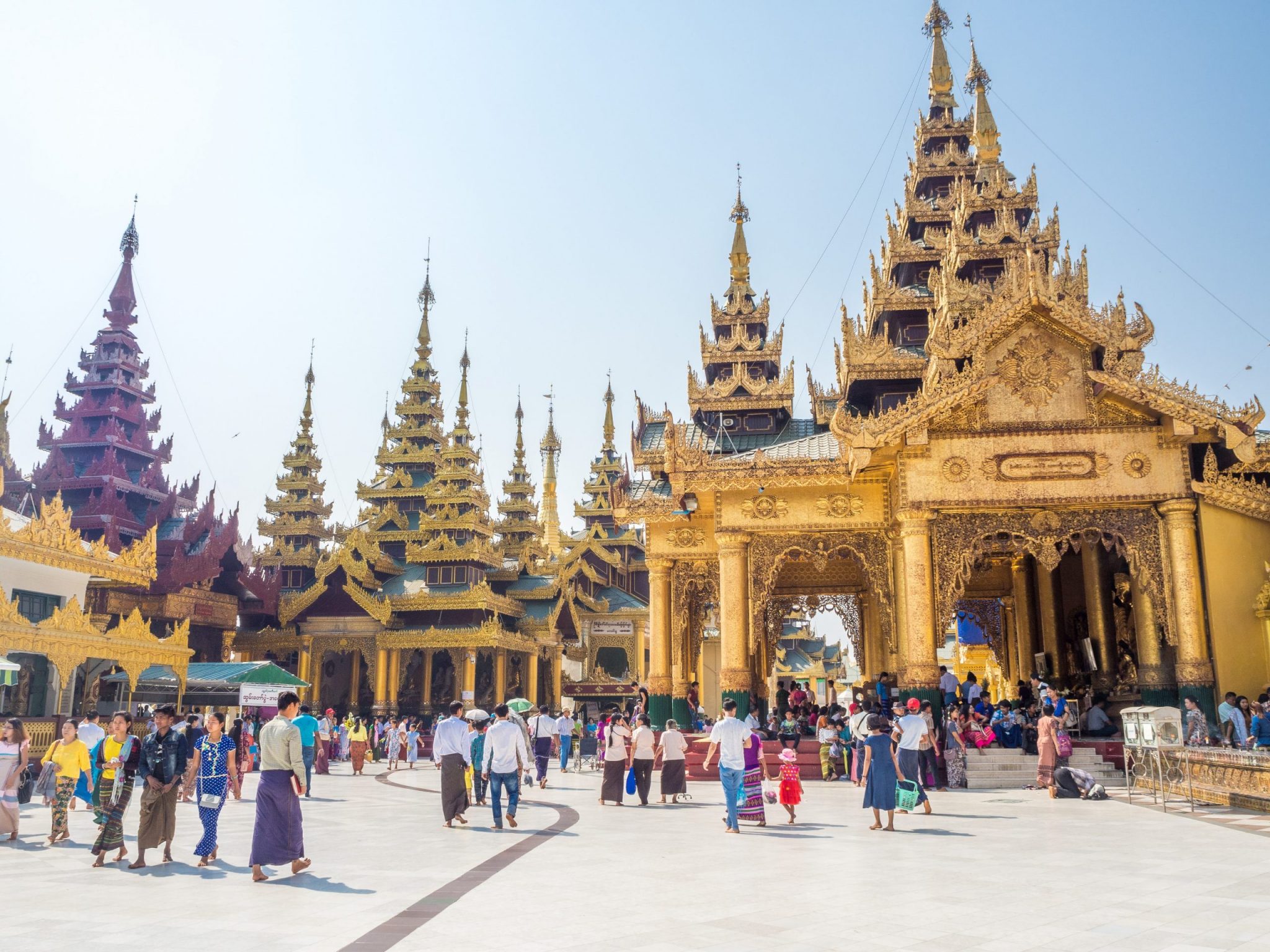 Myanmar is one of the most fascinating, mystical and impressive countries in the world. Due to its turbulent history however, it is also still one of the poorest countries in Southeast Asia.

Myanmar is also known as Burma. It is a country of striking beauty. The alternation of primary forestation, swampy areas, highland plains with elevations up to almost 6000 meters or the sunken mountain landscape off the Malay Peninsula with 800 still untouched islands characterize the landscape of Myanmar.

Myanmar is a multi-ethnic state with about 135 ethnic groups and offers a wealth of cultural characteristics, scenic beauty or architectural achievements.

In the following, we will give you a small but striking excerpt of all this. Knowing full well that a country, its peculiarities and the diversity of its people can never be presented in its entirety. In keeping with our commitment, at the end of the page we will discuss Myanmar's educational system. 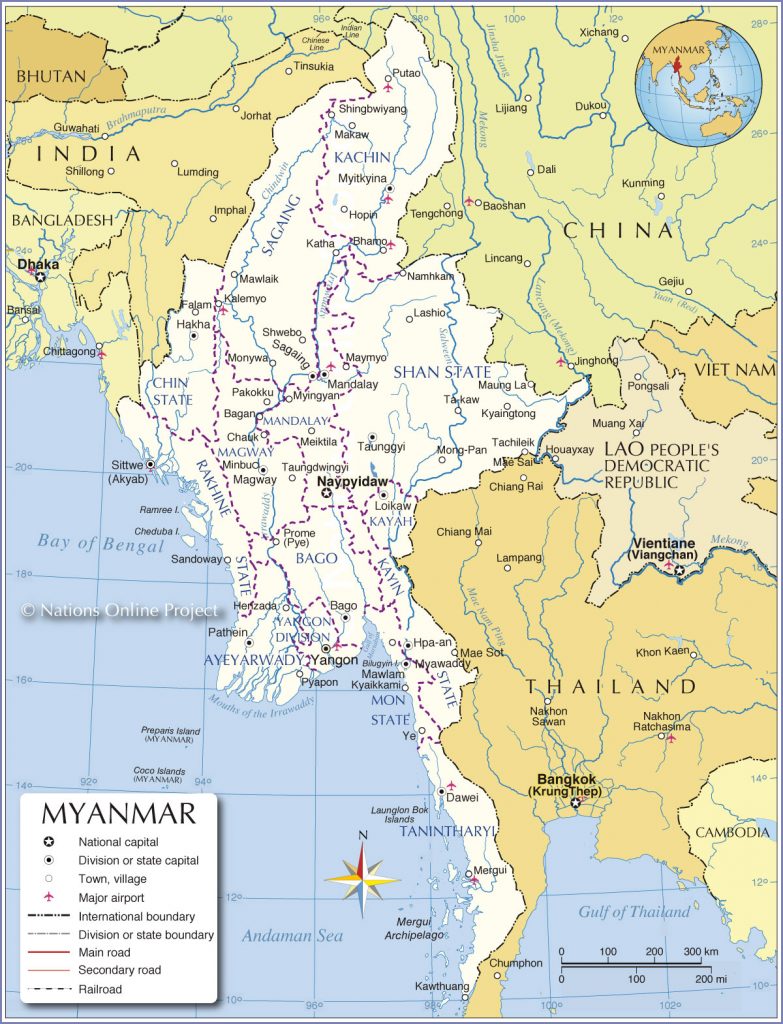 For many visitors the most impressive is certainly the Shwedagon Pagoda in Yangon. It is considered the landmark of the country and its gilded stupa towers majestically over the capital.

Outside of central Myanmar, particularly in parts of Kachin, Karen, and Chin states, Christianity is practiced. American missionaries played a major role in converting formerly animist locals in the late 19th and early 20th centuries, and elements of animism remain part of these cultures. Islam and Hinduism are also an integral part of Myanmar society. Especially in Yangon, you can marvel at the cultural diversity of the country - after all, churches, temples and pagodas line up here. 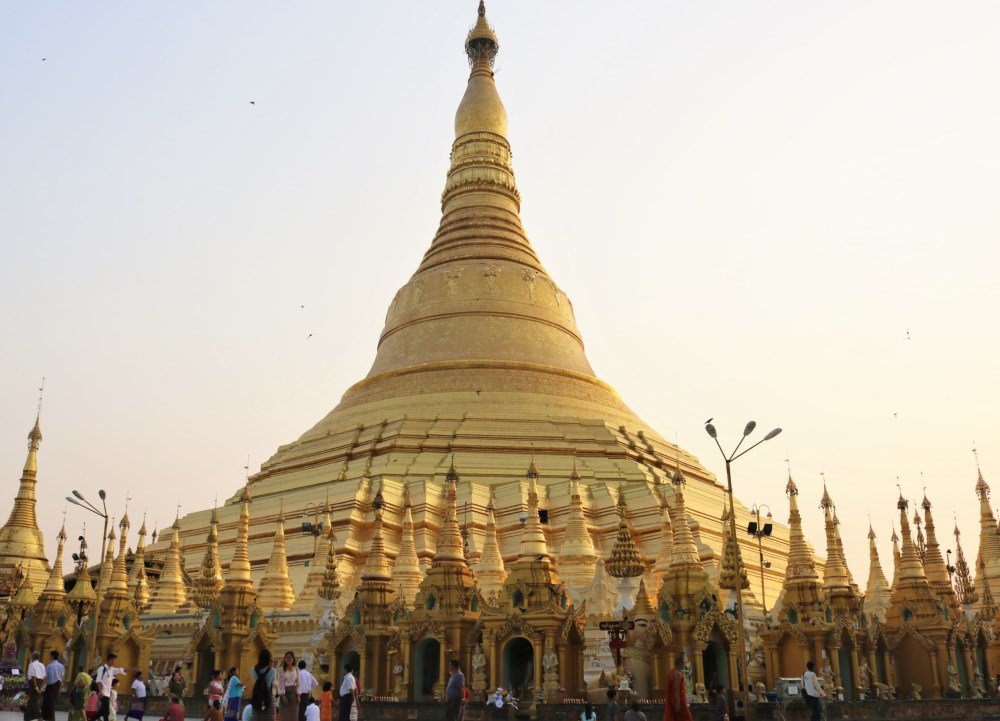 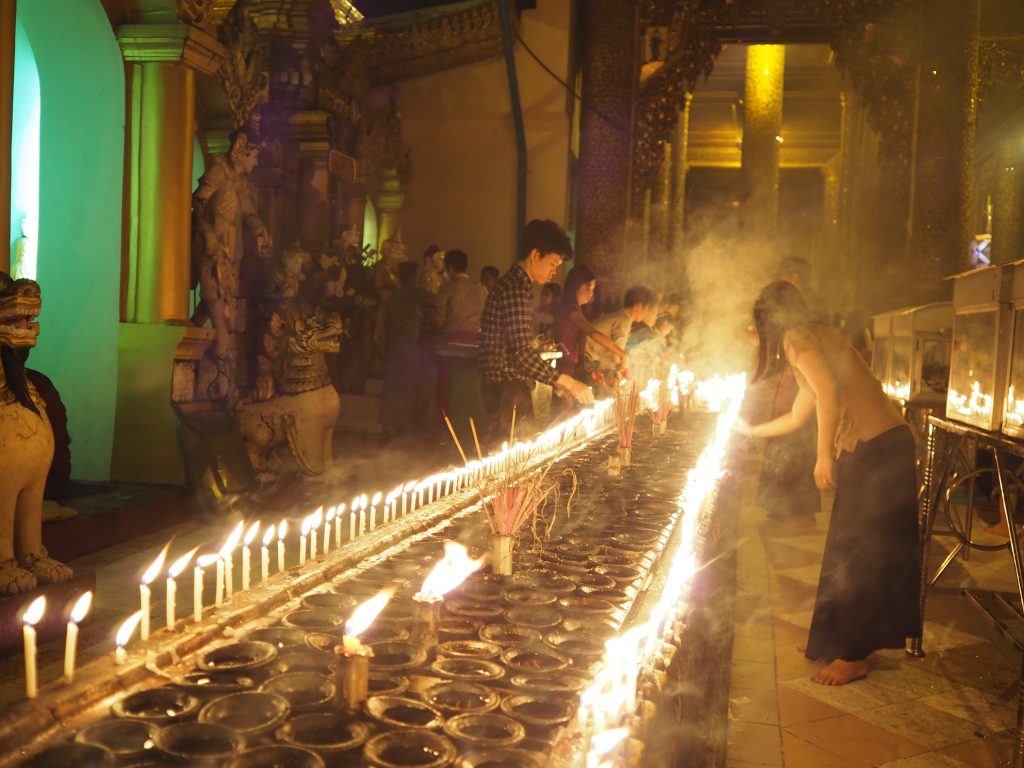 The colorful hustle and bustle in the teahouses is as much a part of the Myanmar street scene as the countless pagodas. Guests sit on small colorful chairs, waiters shout the guests' orders directly into the kitchen, and those who want to place an order or pay draw attention to themselves with a kiss-like smacking sound. Tea is the national drink of Myanmar and green tea is served for free in restaurants and cafes at any time of the day.

Unsolicited snacks are offered, but you only pay for what you consume. Tea stores are especially busy in the morning. You briefly meet your neighbor, get the latest news and start your day with a green tea as a matter of course. Just as Italians take their espresso in the corner pub and Frenchmen stop by the bistro, tea houses have a special social function.

The Burmese love soccer and Lethwei (Burmese boxing). And so it is only too understandable that somewhere in every teahouse there is a TV and a sports program is on. 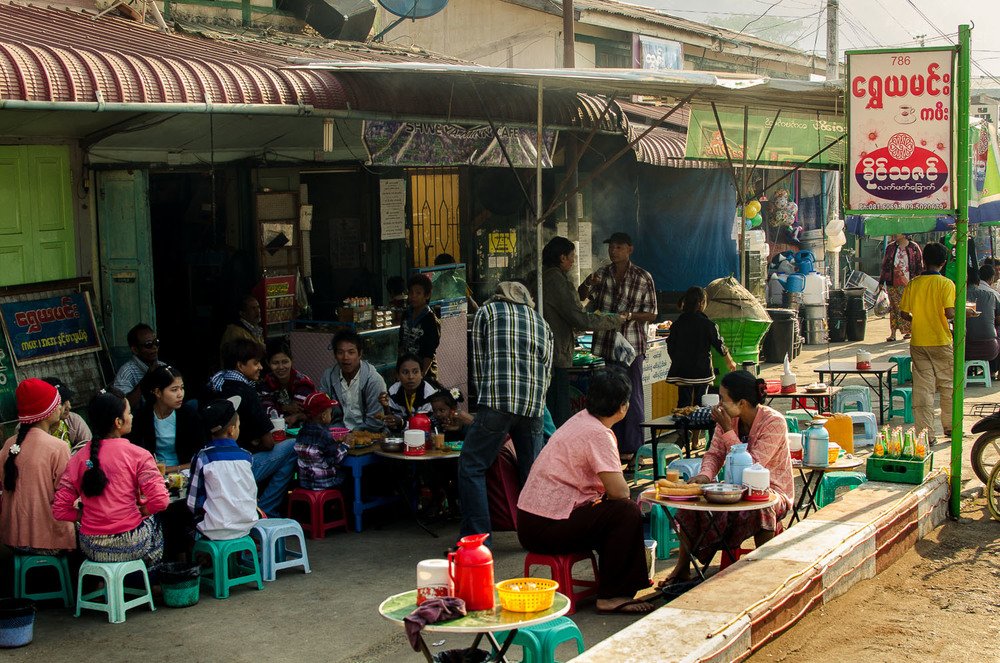 After a few hours stay in Myanmar, you will notice that many Burmese use a kind of make-up called Thanaka. This yellowish-white paste is applied to the face of women and, to a lesser extent, men. Thanaka may be the beauty recipe of many Burmese women - its application promises radiant skin and protection from the sun. At markets you can buy Thanaka either finished as a paste or you buy large wood sticks, whose bark you grate on a stone with water to form a paste. Pieces of bark from trees that are widespread in the region, such as the Indian wood apple tree, are used for production. 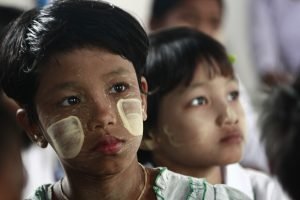 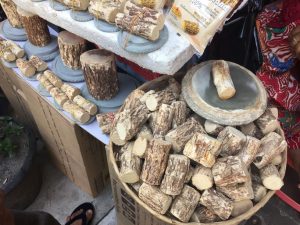 he floating gardens of Inle Lake

Another special feature of Myanmar are the so-called floating gardens on Inle Lake. These are beds built of silt and the roots of the lush water hyacinths that float on the lake. Bamboo poles anchored in the ground keep them in place. Tomatoes are the main crop grown in these beds. Most of the harvest is delivered in the capital Yangon!

The excessive use of fertilizers and pesticides in recent years has led to an increasing deterioration in water quality. Therefore, a training center was established in 2019 to teach sustainable tomato cultivation. 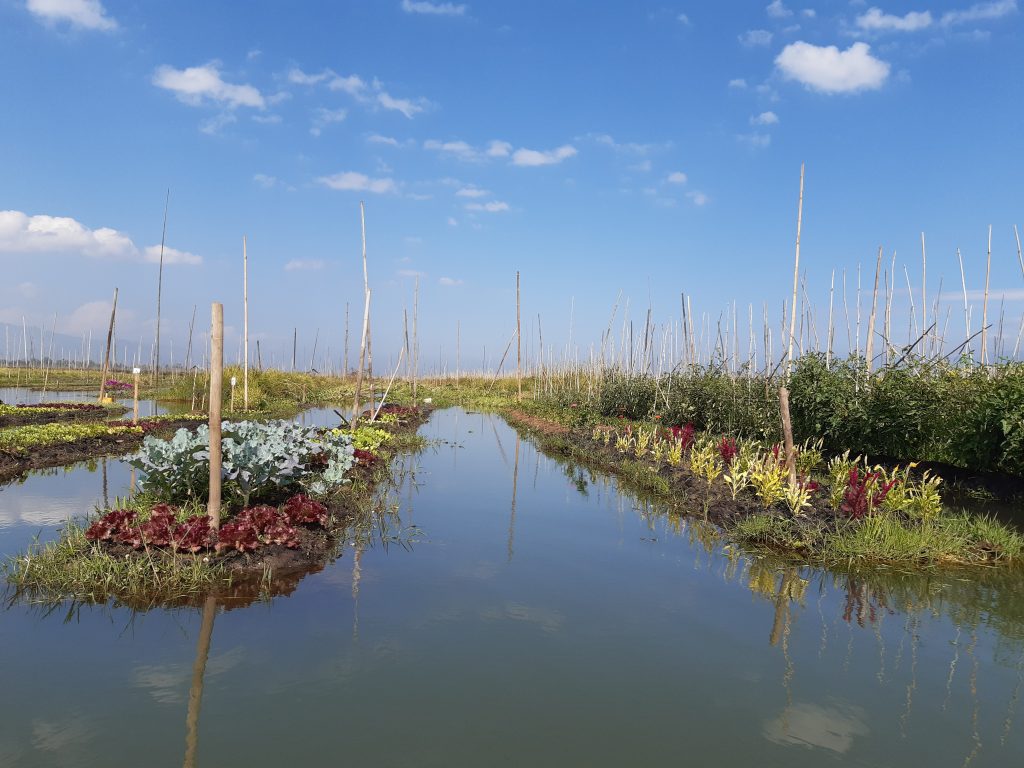 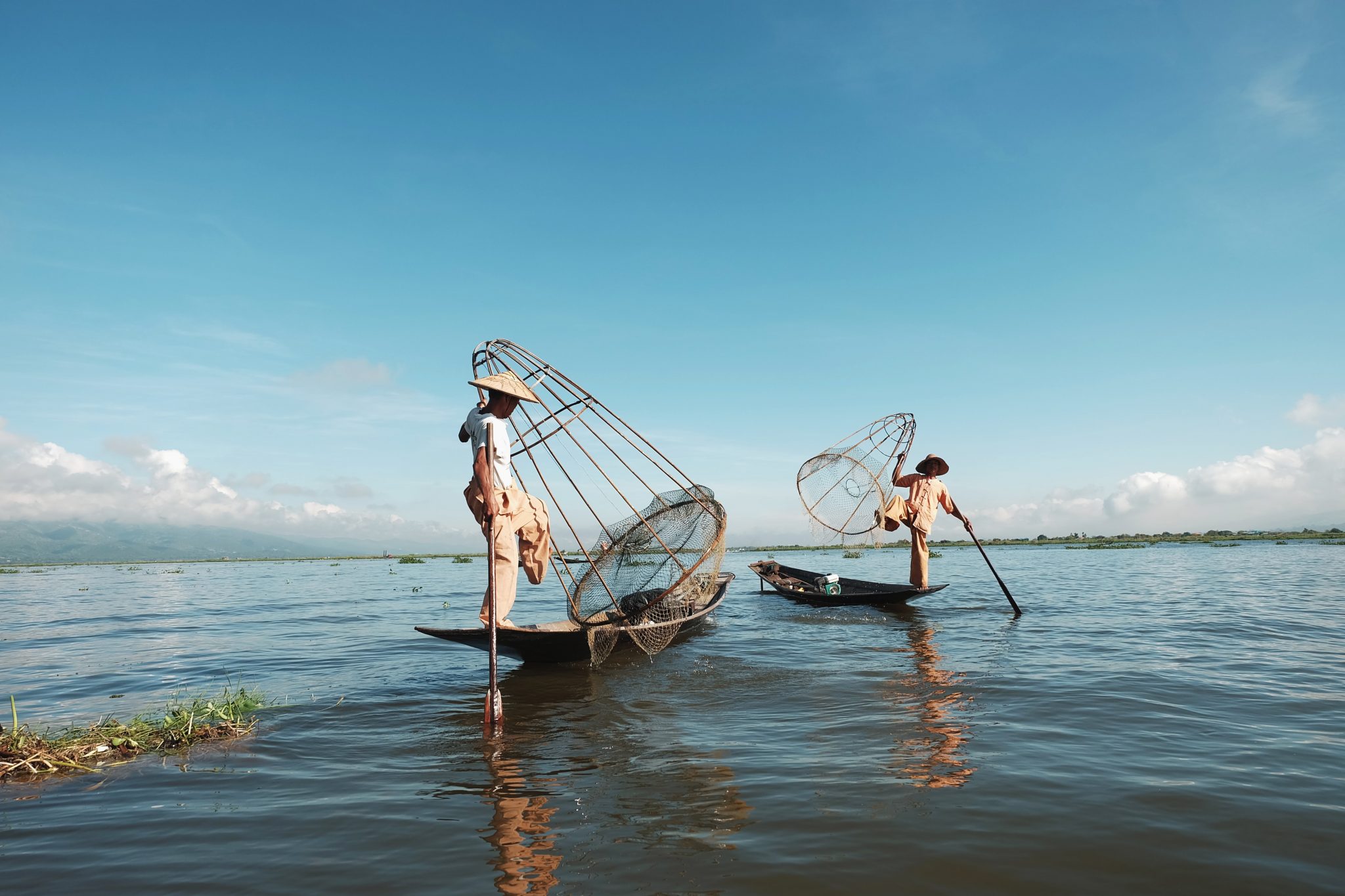 The Inle Lake with a length of 22 kilometers and a width of eleven kilometers is the second largest lake in the country. It is located at an altitude of 900 meters and is surrounded by the dreamlike scenery of the Shan Mountains Inle-See ist mit einer Länge von 22 Kilometern und einer Breite von elf Kilometern der zweitgrößte See des Landes. Er befindet sich in 900 Metern Höhe und ist umgeben von der traumhaften Kulisse der Shanberge.

The Intha, also called one-legged rowers, have lived on the shores of the lake for centuries. They are famous for their fishing technique: standing on one leg, they skillfully navigate their boat across Inle Lake.

If you go to Inle Lake today, you will see many of these fishermen - but no longer as fishermen, but as a photo object for tourists. Because this now provides greater income than fishing! 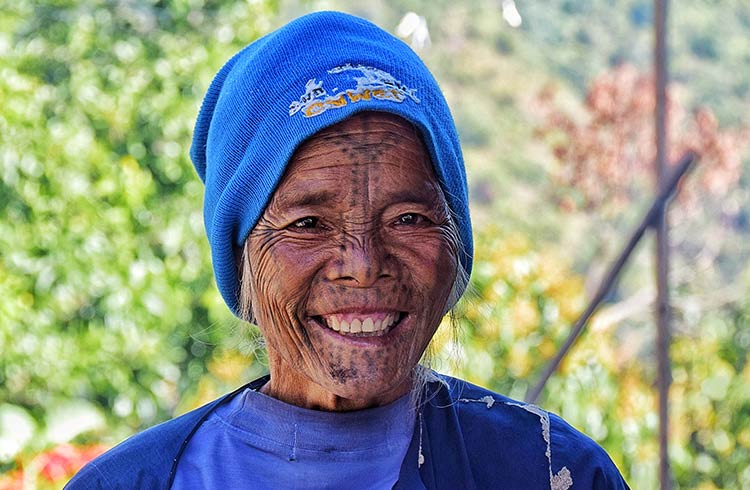 The face tattoos of Chin women

Similar to the Thanaka painting of many women, the tattoos of the Chin women form a special feature and originate from a centuries-old tradition. The background of the tattoos are not really clarified.

There are several legends that justify the painful procedure. One explanation is that the faces of the 7-9 year young girls of the Chin people were tattooed to protect the girls from abduction by other tribes.

According to another legend, the various motifs served to mark the affiliation to the respective Chin tribe. The protection from evil spirits is also a comprehensible reason for the tattoos.

Bagan was once the capital of a kingdom about the size of the present territory of Myanmar. Between 900 - 1300 Bagan was one of the largest cities of the Middle Ages and was about 15 times larger than London at that time.

Today Bagan is one of the greatest archaeological sensations in Asia and is comparable to Angkor Wat in Cambodia. Spread over a vast steppe landscape, countless temples line up, impressive structures whose magic no one can escape.

One can spend days wandering around the grounds and always discovering something new. A stay here makes time stand still and those who had the chance to visit Bangan once will remember it forever. 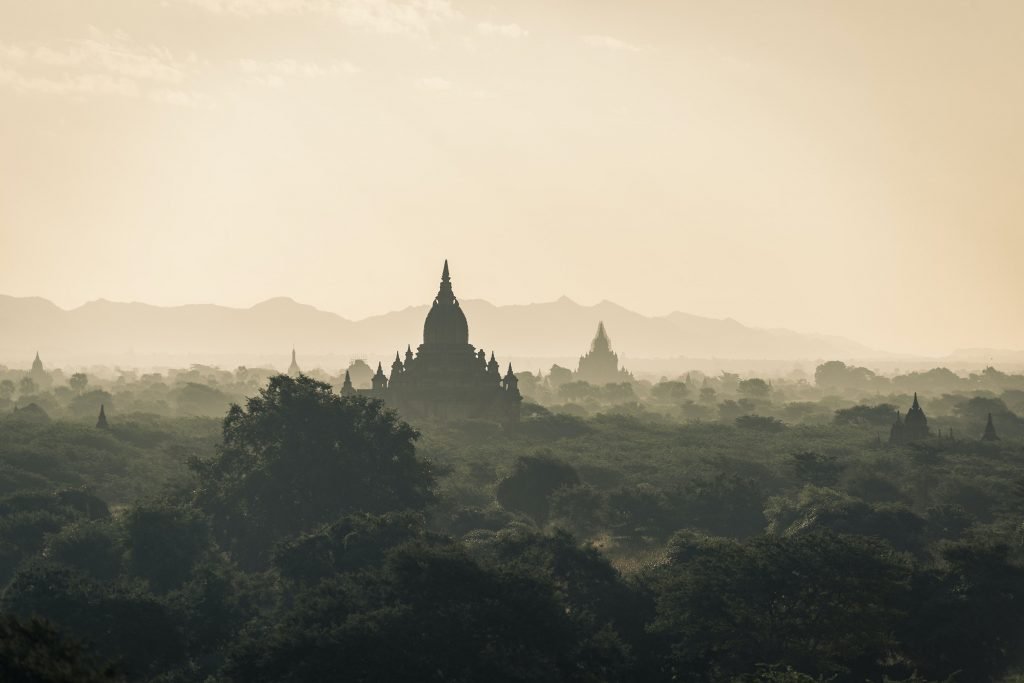 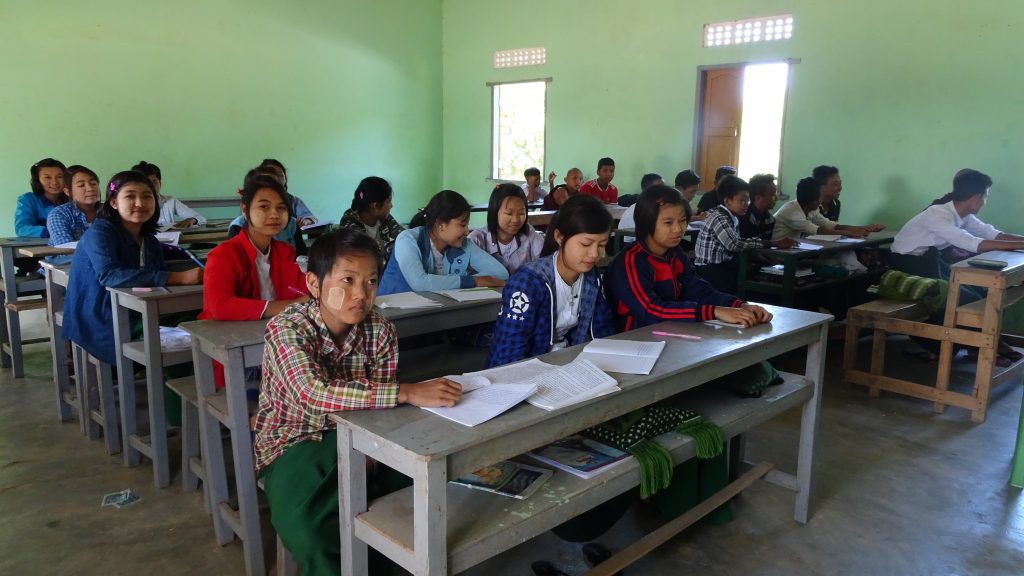 The current education system is comparable to that of mayn western countries.
Children attend elementary school from the age of six to ten and then middle school. Official school attendance ends at the age of 14.
Education is compulsory up to the 5th grade, mostly at state schools or convent schools. Their attendance is free of charge.
A secondary school education is completed at the age of 19. Successful completion of a secondary school entitles the student to study at a university.

Only those who pass a matriculation exam are allowed to study in Myanmar. That is currently about 40% per year. Compared to other Asian countries, Myanmar's education system still performs poorly, but reform efforts are noticeable and the quality of educational institutions is steadily improving. Compared to other countries, university costs in Myanmar are fortunately low. Nevertheless, studying is an insurmountable hurdle for many young people.
The high cost of living in the cities is responsible for this. Those who cannot fall back on a relative in the respective city hardly have a chance to study, despite good school-leaving qualifications. Especially for talented young people from the remote regions of Myanmar, there is thus no opportunity to fully develop their potential and put themselves at the service and development of their country. Especially since there are virtually no government support or funding programs.

And this is exactly where Colours of Life e.V. steps in - giving people chances and perspectives!

Education has traditionally always been of great importance in Myanmar society. This can be explained, among other things, by Buddhist religious practices in which ignorance is cited as a major cause of human suffering and the rebirth associated with it. Even though the acquisition of knowledge was of a religious nature at the time and was geared towards the study of Buddhist texts and the correct practice of religion, reading and writing were an integral part of early childhood education. In many places, this provided monastic schools, where children were taught for free. During the colonial period, secular schools were established throughout the country. Their aim was to teach the English language and knowledge such as accounting and geography. The aim was to educate people who could carry out the tasks of the colonial administrative apparatus. The British first tried to use the monastic school system. This failed, however, due to the resistance of the monks and so the first secular schools were opened around 1870. And with the permission of the then king, Christian missionary schools were allowed to be established throughout the country as early as the beginning of the 19th century. This is the reason why Christian religious communities still exist today, especially in the more remote rural border regions of Myanmar.

Myanmar's independence in 1948 was followed by a brief period of parliamentary democracy. In 1962, it was replaced by a military coup, and the subsequent military dictatorship ruled the country for decades according to socialist principles.

This also had an impact on the education system. In the 1960s, all private schools and universities were nationalized and placed under centralized control. Although the promotion of education was given high priority by the state, it applied only to primary education. The progress made in providing access to primary education for all and in reducing the illiteracy rate even received international recognition: UNESCO awarded the government the Mohammed Reza Pahlavi Prize, which was endowed by the Iranian government, in 1972. However, students who aspired to independence and were politically active were a thorn in the government's side. And so, in 1988, universities were closed for years as a result of the bloody suppression of the student uprising critical of the government. Leading intellectuals were locked up in prisons or forced to leave the country. In addition, the country sealed itself off from the outside world for years. As a result of this isolation, there were hardly any native English-speaking teachers left, and the level of language taught dropped sharply.

With the gradual political and economic opening of Myanmar since 2011, urgently needed education reforms are now being addressed and funding gaps closed. Between 2011 and 2016, public spending on the education system increased by 316%. "Building a modern developed nation through education" is one of the guiding principles of the current government. Currently, Myanmar's education system is undergoing a transformation. In the first National Strategic Plan for Education (2016-2021), the Burmese government identified nine areas that it would like to change in the long term. One of the key points is to increase the number of years of schooling from 11 to 12. With this measure, the government is aiming to bring education into line with international standards. At the same time, it will make it easier for Myanmar young adults to apply to study abroad. Work is currently underway on the second strategic plan (2021-2026), which is to be presented at the beginning of 2021.